There have been numerous animated incarnations of Spider-Man from Marvel over the years, with many actors having voiced multiple versions of the Webhead. The likes of Drake Bell, Neil Patrick Harris, Christopher Daniel Barnes, Josh Keaton, Jake Johnson, and Chris Pine have all lent their talent to the iconic hero in that time.

The most recent animated Spider-Man series is Marvel's Spider-Man on Disney VD, in which the web-slinger is voiced by Robbie Daymond (Sailor Moon, Persona 5, Final Fantasy XV). While promoting the newest Digimon film, Digimon: Last Evolution Kizuna, we had the chance to speak with Robbie and pick his brain about what it's like to play Parker.

We spoke about the physicality of voice acting, the upcoming Season 3 finale of the show, and the potential of folding the character into a future Spider-Verse film or series.

To hear our chat with Robbie Daymond click the podcast player below. We have also included our interview with Into the Spider-Verse director Peter Ramsey along with the transcript.

6m 15s Literary Joe: Talk to us about Spider-Man. What is it like to voice such an iconic character?

And I remember auditioning for Ultimate when I first moved to LA and being in the top five or so. That was auditioning against Drake Bell, and a few TV people, and a couple of people that I knew. Then I found out at ComicCon 2017 that I was the second choice for that show. I just missed it. So that was it.

Drake Bell was the voice for all of the Ultimate stuff that came right before our show. There's always going to be a Spider-Man show on TV in some form or another, or forever. There may be little gaps in between them, but there's always going to be one. Just being in this one show, I've gotten to do the voice in nine different projects. And four of them were all cartoons. That's the nerd dream come true stuff.

I think I auditioned back then for that at Christmas time, 2014/2015, something like that. Cartoons take two or three years to make, and we've been on the air as of 2017, and we're finishing up the final arc of the Maximum Venom (nod to the Maximum Carnage) series, which has been my favorite so far. It's been an absolute blast.

8m 15s Literary Joe: Is it confirmed for a season four, or do you know anything about the future of the series?

8m 24s Robbie Daymond: They don't tell me anything. I'll say this. They buttoned it up pretty well. It feels like it could be it, but I can neither confirm nor deny. I have no idea. If it ended here, I'd be happy with that run. It was a fun three-year run, but if there's more to come, we'll do it.

Marvel animation is in a weird place. They've somewhat moved away from doing series, and now they're doing these mini-run movies. It's more like the modern anime model where you take three or four, put them together, and call it a movie and then release them all at once. And I think that's just due to the nature of how people are consuming media now.

Kids don't want appointment viewings. They want it all right now, binge-able.That's happening a lot in cartoons. They'll put out ten episodes, a dozen episodes, and within a week, it's it streaming somewhere. That's the way things are going. If anything happens, that's what I would imagine it would go.

9m 27s Literary Joe: The other thing that could happen is you could be pulled into the Spider-Verse films. They talked about bringing every version of Spider-Man in. That would be interesting. Even if the show did wrap up, that's something you could see happen.

9m 58s Robbie Daymond: It will be out there in one form or another forever. If that were to happen, of course, that would be awesome. But I think just to be part of the history, like when I see lists of every actor that's ever played the role of Spider-Man, there's only 12 of us since the sixties. It's been an awesome ride.

25m 6s Darth Lexii: You play many action heroes; whether it be in Final Fantasy or Spider-Man, and you get hit a lot! What is your favorite way of taking hit and evoking that emotion?

25m 24s Literary Joe: I imagine you were bullied a lot as a kid?

25m 30s Robbie Daymond: I always took revenge on my bullies. (Laughs) Listen, a lot of it is muscle memory at this point. There are a lot of sounds; I've made literally thousands upon thousands of times. But, I'm always physical with it because I feel like whenever I play something or watch something, I can tell when someone's phoning it in.

I've seen people who do it, and I look them over, and I'm like, they've been in the business for over 25 years. Maybe I'm not that jaded yet. But, I think you have to get into the physicality. If you're taking a gutshot and you're not doubling over, then you're not going for it, baby. You got to go for it.

So, I think physicality is the most important part. I think my favorite damaged take, which is strictly germane to anime, is getting hit puke up blood sound. A guy just hit you in the stomach; why are you puking blood? You should go to the doctor. You've got something wrong with you. 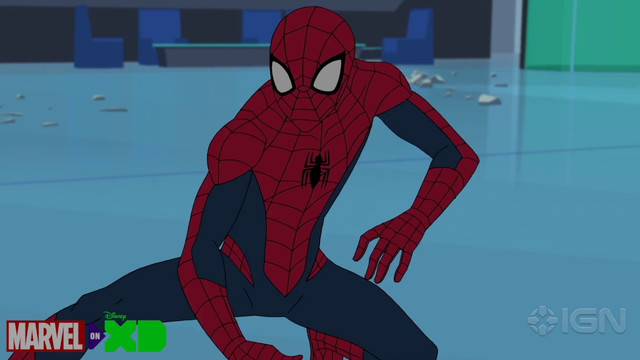 27m 0s Darth Lexii: Do you have any inspiration that you pull from certain voice actors?

27m 4s Robbie Daymond: I think if you know the style, you don't necessarily have to pull off of somebody. There are people that I look up to, of course, for their performances. But when it comes down to individual moments, I'm trying to think about my performance, what I'm doing. The imitation part of it is good for the beginning of your voice acting career when you're trying to figure out what sounds good. Once you're in the groove and moving along professionally, then I think you have to stay more internal.

Some of my favorites are Rob Paulsen, and he's one of my biggest heroes. I gravitate toward him because he has a recognizable voice to me. Yet, he has a 40-year career and has done a ton of versatile stuff. And, a lot of people say that I have a recognizable voice. I like to try to make sure that it doesn't inhibit my career. It becomes a selling point. Like, "Oh, that's Robbie, but he sounds different! Oh, he sounds great". And, you don't care that it's me. You like it even more. 28m 12s Literary Joe: Like Troy Baker or Nolan North? You recognize their voice, but you're not mad about it.

28m 23s Robbie Daymond: In particular, those two guys, though, because I work with Nolan often, we are doing a show together right now that I can't tell you about, but they've also got "everyman" voices. They do have an "everyman" voice. People who have more distinct voices catch peoples' ears a little bit more.

When you go see a movie, you don't care that it's Brad Pitt. You know exactly who that is, and you get over it. It's a willing suspension of disbelief. The same should be true for a voice-over, especially for those of us who work in it full-time, all the time, boots on the ground, multiple projects a year.

We're not celebrities doing one Disney movie a year, maybe one DreamWorks movie four years later at the height of our career, and cash in a paycheck. We don't sound like Chris Rock. We do a whole bunch of other stuff. That part of it is part of our longevity.

Tai is now a university student, living alone, working hard at school, and working every day, but his future is still undecided. Meanwhile, Matt and others continue to work on Digimon incidents and activities that help people with their partner Digimon. When an unprecedented phenomenon occurs, the DigiDestined discover that their relationship with their partner Digimon will come closer to an end when they grow up.

As a countdown timer activates on the Digivice, they realize that the more they fight with their partner Digimon, the faster their bond breaks. Will they fight for others and lose their partner? The time to choose and decide is approaching fast. There is a short time before "chosen children" will become adults. This is the last adventure of Tai and Agumon.

Digimon: Last Evolution Kizuna is now available on both Digital and Blu-Ray/DVD!